For the first time since 2016, Europe is ahead of China in the number of unicorns created or $1bn exits.  Yet another sign of the enormous momentum in the European tech and entrepreneurial ecosystem.

The tech boom is also being spearheaded by European cities; of the global ‘unicorn cities’ — cities with one or more unicorns — over a third are in Europe*.

In H1 2021, European Venture Capital broke several annual records as VC deal value, exit value and the aggregate value of unicorns in Europe smashed previous bests. Despite COVID-19 related uncertainties faced by many businesses, there has been a record flow of capital into the European ecosystem with valuations across all financing stages setting new records. Venture Capital in Europe has never been hotter. 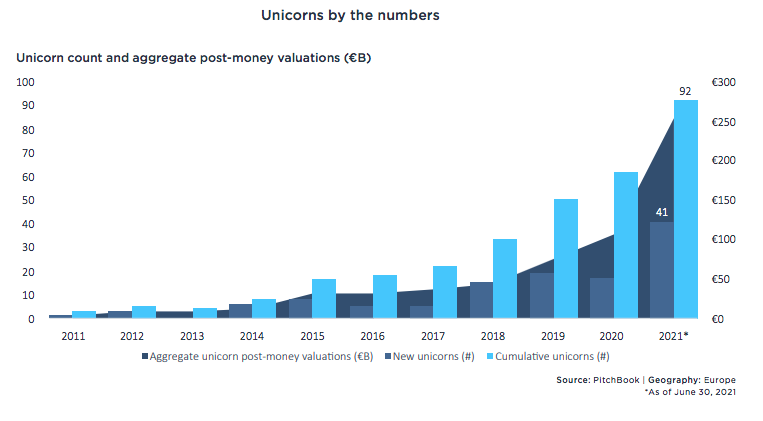 The rapid rise of European unicorns reached lofty new heights in H1 2021. Since 2018 the number of European Unicorns has roughly tripled, with the aggregate value increasing almost six-fold. The total value of European private companies with a valuation above €1 billion has swelled to €253.3 billion in H1 2021**. A healthy unicorn market generates more capital into the Venture Capital ecosystem as investors buoyed by success look to back the next break out stars.

On average time it takes a European unicorn to achieve a €1 billion plus valuation has increased slightly from 6.8 to 7.2 years in H1 2021.  However, European unicorns in 2021 tend to be worth twice as much by the time they reach the hallowed status.  This is a direct consequence if the surge in capital available from large VC funds as well as non-traditional and international investors.

With record low interest rates persisting across Europe as part of a robust fiscal and monetary stimuli, many investors have sought higher returns from Venture Capital.  Institutional investors are increasingly attracted to higher risk-reward VC investment in the belief they can unearth an outlier company. Pandemic induced growth is also a major factor for VC backed tech companies with significant spikes in usage, recurring revenues and growth rates as individuals have been forced online.

Outside Investors Join the Party

Previously, many viewed VC as a phenomenon borne out of Silicon Valley that spawned some of the largest tech companies in the world in the early 2000’s. Until recently, the focus of Global funds was firmly on US start-ups.  As the US VC market has blossomed, mature ecosystems across the globe have sprung up. US investors now target Europe-based companies in search of cheaper assets that could deliver stellar returns. 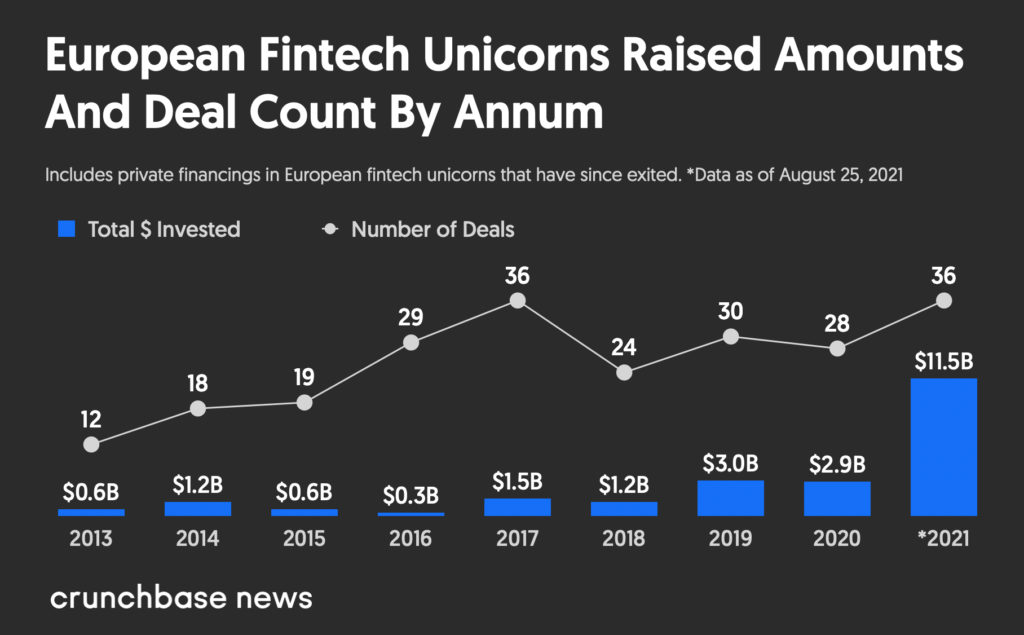 Certain factors have helped regions become specialists in sectors.  For example, fintech has boomed in London due to its financial services pedigree, software start-ups have emerged in Israel due to its large technology footprint and the popularity of gaming has helped start-ups prosper in Finland.

Within Europe, the UK is leading the unicorn surge. Fintech Starling and renewable energy provider Bulb were among the prominent companies to hit unicorn status this year, as the country saw a whopping $5.7bn in fintech investment in the first half of 2021 — 34% more than the total raised by UK fintechs in 2020.

Germany has created the second highest number of unicorns in Europe. On-demand grocery delivery start-up Gorillas hit a $1bn valuation only nine months after launching in May 2020.  The company raised €250m in March of this year and a whopping €865m last month in a Series C round led by Delivery Hero.

France, as one of Europe’s prominent tech hubs, is in third place. ManoMano and Alan secured hefty funding this year, and raised their valuations to over €2.4bn and €1.4bn respectively.

However, we are starting to see more unicorns close substantial rounds in other countries offering attractive characteristics such as low cost of living and highly skilled technical workforces.  Sweden has produced a healthy pipeline of unicorns including Spotify.  This year Klarna the payment specialist became one of the most valuable VC backed companies in Europe and battery developer Northvolt closed one of the largest rounds ever at $600m in H1 2021.  Other regional unicorns include second-hand fashion retailer Vinted in Lithuania, micromobility company Bolt in Estonia and payment provider Mollie in the Netherlands.

European companies have traditionally been valued lower than their US counterparts. Often US investors will look for companies that have proved they are scalable by penetrating multiple locations within Europe and possibly Asia, before raising additional capital for expansion into the lucrative US market.  For example numerous European fintech unicorns, including Monza, Revolut and N26, have expanded into the fragmented and competitive US banking market.

European VC funding rounds are also looking more similar to US VC rounds in terms of size and wide ranging investor participation, further driving up valuations. Europe now has a healthy flock of “decacorns” – unicorns with a valuation in excess of €10 billion.  These were not around 2-3 years ago and valuations are expected to rise further as US investors pump more capital into European companies.

Heading into 2020, privately backed companies were under global scrutiny for overheated exit valuations and questions about growth sustainability.  However, as the pandemic unfolded, tech-based  companies, which are inherently linked to VC, identified pent-up investor demand seeking growth opportunities to offset losses in sectors battered by the pandemic.  As a result, European VC exit values grew strongly in 2020 and continued into 2021, as VC-backed companies took advantage of pandemic-induced growth.

The record exit values generated in H1 2021 have enabled more capital to flow back into early stage opportunities. Investors look to divest gains from unicorns and build exposure to the pandemic-driven digitalisation wave.  Investment profile is similar for investors as VC backed companies from start-up to unicorns tend to be loss-making, as they seek large scale customer bases and prioritise revenue growth over profit making.

Whilst the growth in Europe is impressive, the US is still maintaining its lead. This year alone, it created nearly as many unicorns as Europe has in the past three decades *. And VC investment into the US isn’t slowing down; with $140bn of investments pouring into the country so far this year, 2021 is set to be yet another record year.  This was exemplified by the US payment platform Stripe, which in March 2021 raised €498 million resulting in a post-money valuation of €78.9 billion and making it one of the most valuable companies to come out of Silicon Valley. 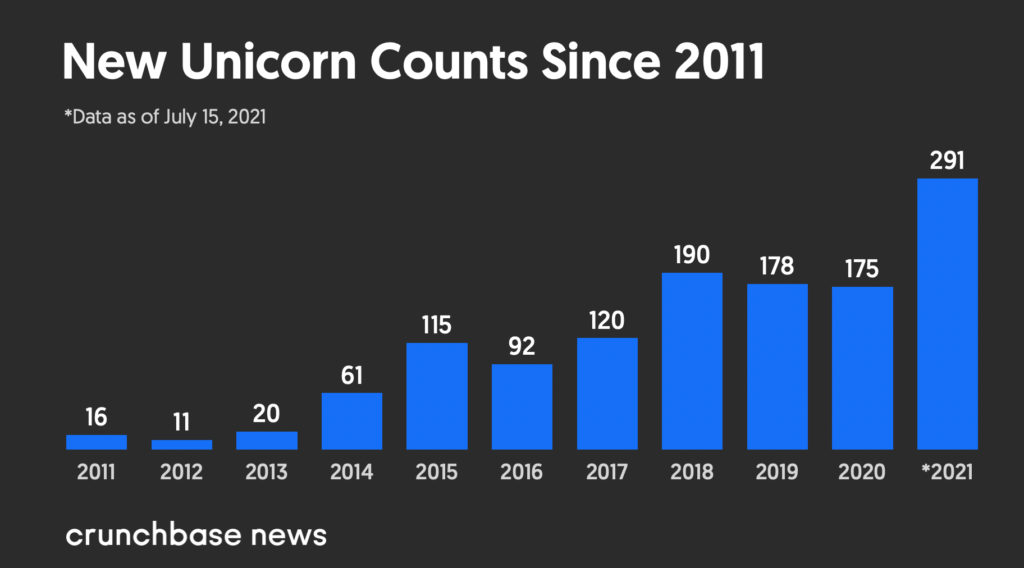 Tech businesses have been huge winners from online shopping and remote working that appear to be the new norm for many.  With such a high level of continued investment into VC, we should see accelerated innovation as more resources are pumped into technological development.  This underlying trend should help unicorns develop more quickly and we move further into the 2020s.

The amount of capital flooding into European VC in accelerating and this should see unicorn rounds and valuations increase further.  One of the largest changes has been the self-perception of European unicorns. Successful VC-backed companies in Europe now see unicorn status as a steppingstone along their investment runway rather than a target valuation.  In the next few years, we could see the first €100 billion VC-backed valuation in Europe.

CSS portfolio companies, many with disruptive digital technologies, are looking to take advantage of these favourable market conditions through planned IPOs or putting themselves firmly in the shop window seeking to attract growth hungry suitors. To find out more click HERE.

Venture Capital Activity Skyrockets in First Half of 2021