With global investors looking to the UK technology for growth, should private investors do the same?

In what was another record-breaking year, investments in the UK tech sector soared to £10.1 billion last year – up £3.1 billion on 2018’s very strong figures and the highest in UK history. Venture capital investment into US and Chinese tech firms plummeted by 20% and 65% respectively.  Investors are turning away from the world’s two largest tech markets and instead looking to the UK for future growth.

The UK tech sector appeals to investors for a number of reasons including a business friendly environment, talented workforce and longstanding reputation for innovation.  At the same time the politics between the US and China is playing into Britain’s hands.  With both countries looking to be the dominant technology force in the world, neither China nor the US is likely to sell strategic technology to each other.  This creates a potentially huge trade arbitrage opportunity for UK and European deep tech companies to sell both into the US and China over the next 20 years.

VC investment growth in the UK exceeded 40% for the third year in the row.  All the more remarkable considering the background of political unrest and uncertainty we have seen during that time. 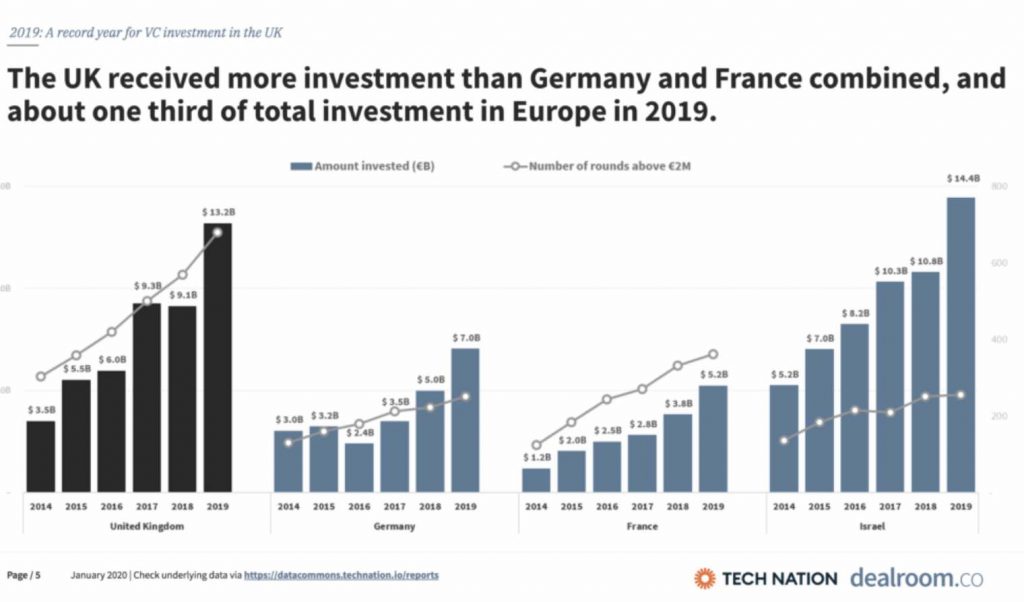 Eight more unicorns were created in the UK in 2019 – there are now 77 unlisted tech companies valued at over $1 billion in the UK, twice the number of any other country in Europe and second only to the US and China.  At the same time early-stage company investment increased reaching £3.9 billion.

On a city-level, London joins the Bay Area, Beijing and New York at the top of the world’s most funded locations.  Companies headquartered in London raised £7.4bn during 2019.  Six UK cities rank amongst the top 26 cities in the world for raising venture capital in 2019, these are London (4th), Cambridge (12th), Bristol, Oxford, Manchester and Edinburgh.

Particular areas of interest include technology platforms that use the internet to deliver essential services to the mass consumer market.  This is a shift over the last decade where lifestyle products such as Facebook and Netflix utilised the ubiquity of the internet to build some of the largest tech companies in the world.  Consumers are now using their smart phones and other internet linked devices to access non-discretionary items such as clothing, food, finance, energy, transport etc.  This is where investors are seeing the greatest growth.

Other areas attracting significant investment include artificial intelligence (AI), deep tech and clean energy.  The surge in investment has helped make these, along with fintech, the UK’s best performing sectors.

2019 saw one of the UK’s largest ever Series A investments, $230m into payments processor Checkout.com in May, and the largest UK round of all time with $800m invested in supply-chain fintech Greensill in October just five months after the company had raised $655m.

It has been well documented that despite being integral in innovations in technology, including the internet itself, the UK has never produced any blue-chip behemoths to rival the likes of Apple, Facebook or Google.  With increasing investment, many feel this could be about to change.

It seems private investors are following the lead of global institutions and where appropriate mirroring their investment strategies.  A survey of 1,400 of its customers by AJ Bell has revealed:

A separate survey by GraniteShares showed that renewable energy was the top choice of affluent investors seeking long-term returns, with nearly one in three favouring the sector in 2020.

Technology, commercial property and gold were also popular selections for potential gains over the long term.

This is Money.co.uk: Where the wealthy are looking to invest in 2020

How Institutions Invest in Venture Capital