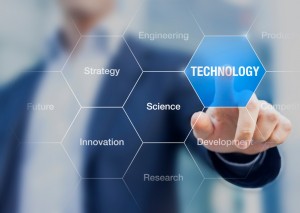 Warren Buffett and Charlie Munger of Berkshire Hathaway fame are widely heralded as the greatest investors of all time.  Their tried and tested investment strategy is centred on buying securities in typically well-established, non-tech companies identified through their investment model as under-priced.  Whilst Berkshire Hathaway has its own number crunching fundamental analysis to identify investment opportunities, “Value Investment” has been the standard investment strategy for the majority of institutional investors and major funds for the past century.

At the same time, many traditional investors will consider these well-known industrial powerhouses to be lower risk investments when compared to technology companies.

Recent analysis by Aquaa Partners challenges these assumptions and demonstrates that over the past 30 years technology companies have massively out performed traditional stocks whilst also being less volatile.  Investment is about the future and with uses of technology growing exponentially and into every sector, has the fundamental risk-reward relationship shifted permanently towards technology companies? In our latest blog below we summarise the findings of the research and also try to establish what pointers we can learn for the next twenty years.

To access the full report by Aquaa Partners Investment Research please click The Death of Value Investing and the Dawn of a New Tech-Driven Investment Paradigm.  Investment in UK technology companies can often benefit from significant tax breaks through the Enterprise Investment Scheme. For more information please click EIS Shares.

Total Shareholder Returns (TSR) represents capital growth in price plus dividends plus stock splits. Aquaa Partners use TSR as the basis for comparing performance between technology companies and the large non-tech companies.  Over the past 22 years, the Nasdaq 100 Tech index has delivered a TSR of 11,630 per cent.  The compares to the Nasdaq 100 non-tech index TSR of 4,543 per cent, even though this non-tech index includes Amazon and Alphabet (Google). 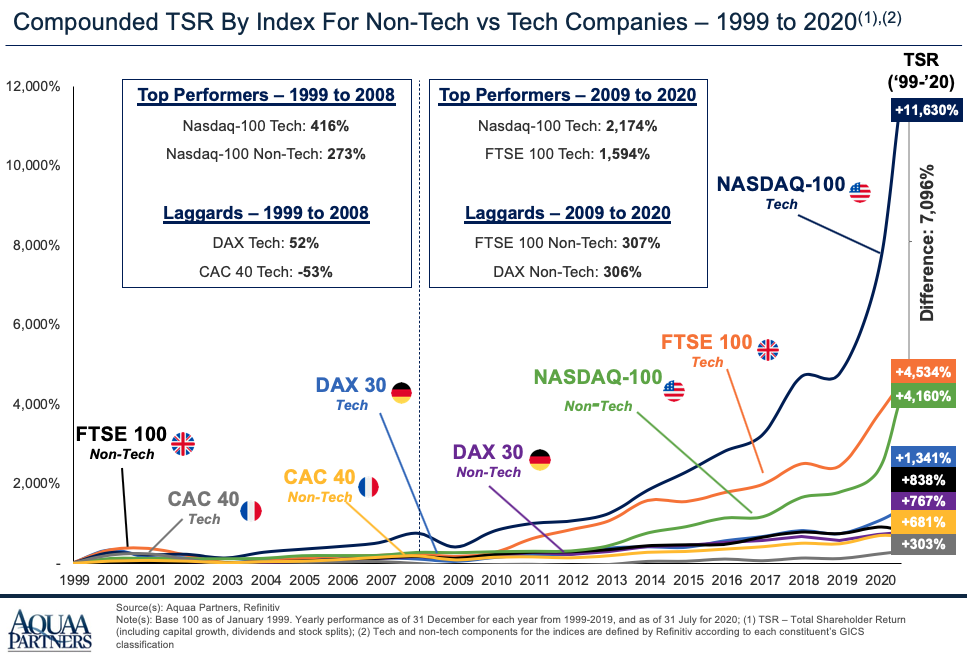 The difference in performance is even greater when compared to the FTSE 100 Non-Tech index, with the Total Shareholder Returns of the Nasdaq 100 Tech Index almost 13 times greater.

For the Aquaa research report” tech companies” are defined as companies that either:

Since January 1999, the Nasdaq 100 has returned 13,350 per cent in TSR whilst the average of returns across the FTSE 100, the CAC40 and DAX 30 indices has returned 864 per cent.  That is an approximate return 15 times greater over a period that includes the dot-com collapse.

So Tech Stocks Show Greater Returns, What About the Risk?

Fuelled in part by the dot-com bubble, tech companies are still perceived by many investors as high risk particularly when compared with the non-tech stalwarts of say the FTSE 100.

To test this perception, Aquaa Partners has again compared the Nasdaq 100 against the FTSE 100, CAC 40 and Dax 30 indices.  Risk is measured and expressed as a percentage of the maximum potential loss each year.  This is calculated by taking the lowest price in any year for each index constituent compared to the starting price for that year.

The data shows a paradigm shift.  Since the late 1990’s, which encompassed the dot-com boom and the emergence of the internet, to today, the tech sector has gone from being volatile and risky to becoming a safer haven of value.

Since 2008 an even more significant shift has occurred.  Over the 12 plus years from 1 Jan 2009 to 31 July 2020, the average of the maximum point of loss for the tech sector was 7.6%, compared to 12.7% for the non-tech sector.  During this time, non-tech had a maximum point of loss that was higher than for tech in every year except for 2019, when tech’s maximum loss of only 3.4 per cent exceeded non-tech’s maximum loss of 1.3 per cent.

In the market turmoil of this year, tech stocks declined less than the slower growth, non tech stocks, 21.2 per cent compared to 36.4 per cent.

In 1965, Gordon E Moore, the co-founder of Intel, predicted that the number of transistors on a microchip would double every two years affecting the speed and capability of computers whilst the cost of computers would halve.

The effect of Moore’s Law has materialised across most technologies and in all industries as the world has become more and more technology dependent.  This is attributed as the main reason behind the extraordinary returns from tech stocks.

Nasdaq is dominated by Apple, Amazon and Microsoft and many feel that big tech is not representative of the tech sector as a whole. There has also been much chatter on how Big Tech stocks are overpriced and at risk of a big fall possibly due to regulation or tax changes.

However, Nasdaq also represents may emerging technology companies.  The last decade has seen amongst others the emergence of AI, robots, drones, electric self-driving vehicles, 5G, VR, AR, holograms, renewable energy, plant-based meat, vertical farms, 3D printing and block chain.  All this advanced tech is emerging now and is growing exponentially fast as it works on top of existing tech opening up even more applications.

The technology sector seems in rude health. Additionally, many of the Big Tech companies have been actively diversifying by buying the new kids on the block.  If they are forced to spin out some of these companies in the future then eBay’s acquisition of PayPal may serve as an example of how this can work.  (Investors in Facebook take note and do not fear the spin-out of Instagram or WhatsApp).

The first category below Big Tech includes the unicorns defined as private companies valued at over $1 billion. Many of the first generation of unicorns have moved onto listed markets or been bought out. These include companies such as:

Current unicorns are fast on their heels and include:

The success of Big Tech, followed by these unicorns, has led to unprecedented investment into venture capital.  At least 80 per cent of venture capital is invested into tech companies.

In 2019, approximately $161 billion of venture capital was invested into 22,645 private companies in North America and Europe.  By comparison, a surprising statistic from the report details that during the dot-com peak investment year of 2000, a total of only $49 billion was invested into 3,200 companies.

Since 1981, the daily 10 Year Treasury yield has fallen by 96%, from 15.05 per cent to 0.71 per cent *.  As investor appetite has diminished for bonds many fixed income investors turned to high yielding equities.  Most of this investment was aimed at traditional, value based non-tech companies offering good dividend yields.

This is likely to change due to the combination of cash-flow pressures leading to the slashing of dividend payments allied with the superior balance of risk-reward from tech companies.  Many are now saying that tech stocks are the new value stocks.

If the trends of the past ten years continue, non-tech companies will become less attractive to long- term investors.  Traditional companies that fail to embrace technology will become commoditised with consumers able to buy the same product from competitors that have utilised technology to deliver on price.

Over the next twenty years there will be the inevitable peaks and troughs due to the cyclical nature of the financial markets.  Diversification is key in any successful investment portfolio and there will always be a place for value investment strategies focusing on established non-tech companies as clearly demonstrated by Messrs Buffett and Munger.  Also unlikely to change, is the exponential growth of tech: this should be reflected in the balance of well managed portfolios and, in turn, in overall returns to investors.