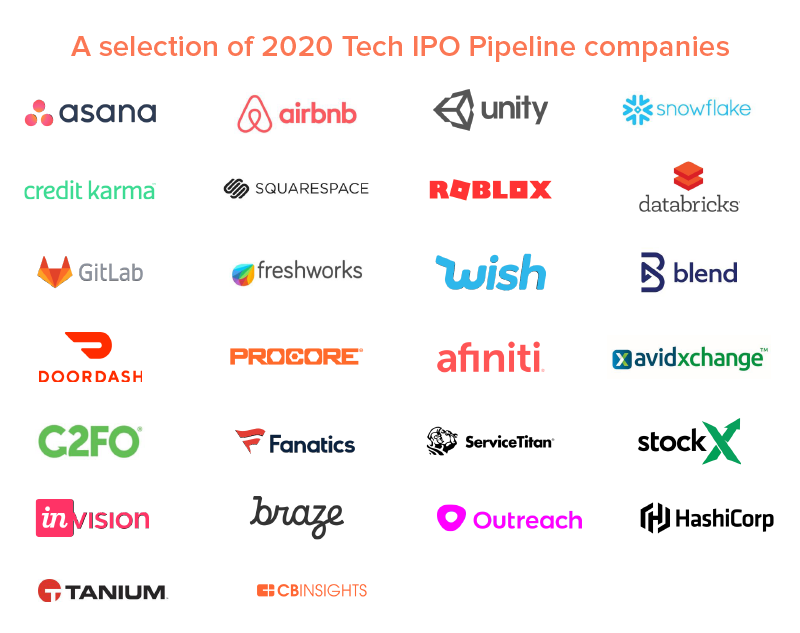 Are Direct Listings and SPACs Set to Transform the Tech IPO Market?

The last week of August saw seven high profile US tech unicorns announce upcoming Initial Public Offerings (IPOs) with a combined valuation in the region of $44 billion.  Add into the mix Airbnb filing for its long-awaited public offering and these look like very exciting times for the US IPO market.  However, not all is rosy and change is afoot. A number of these unicorns have decided a Direct Listing is their preferred route to the public markets; even before the New York Stock Exchange (NYSE) announced SEC approval for companies to raise capital when going public through a Direct Listing.  Many feel this will prove game changing for Direct Listings and at the same time sound the death knell for traditional IPOs. Below we look at the advantages of Direct Listings as well as why there has been a recent frenzy of Special Purpose Acquisition Companies (SPACs) as another alternative to traditional IPOs.

For at least the past three years, the lack of IPOs along with the shrinking number of public companies has been a hot topic in the financial markets.  The cost and arduous process of IPOs was proving inhibitive to private tech companies that could raise massive amounts of capital in the private markets.

This has all changed recently.  In June, the amount of money raised by VC- and PE-backed companies in IPOs reached its highest level since May 2019, according to PitchBook data.   This has continued through Q3 with private tech unicorns striking while the iron is hot riding strong sentiment in listed tech companies and before the uncertainty of the US election hits the public markets.

However, the traditional IPOs have been heavily criticised on two major fronts:

This has resulted in the emergence of Direct Listings, trail-blazed by Spotify in 2018 and over $30 billion of alternative investment capital raised in SPACs.  Both offer an alternative route to the public markets for private tech companies.

American tech stocks have shown big gains for investors since Spring. The Nasdaq rallied by more than 70 per cent from its March lows on hopes that tech companies would benefit during lockdown with consumers and businesses buying more goods and services online as well as a shift to remote working. A record high for NASDAQ last week has been followed by a drop of more than 10 per cent in a sharp correction. However, the index is still up 20.9 per cent since January.

Tesla hit the headlines losing over $100 billion in value in one day on 8th September with shares closing at $330.21.  That said, the shares remain strongly ahead from $86 at the start of the year.

Analysts predict that the markets will encounter a number of swings as economies stage a recovery.  This week’s fall in tech stocks is seen as a short term correction as US monetary policy is expected to remain loose for some time yet.

The overall strong performance of tech stocks on US listed markets has led to a rush to the public markets by a number of high profile tech unicorns.  In the last week of August we saw Snowflake, J Frog, Sumo Logic, Unity Software, Amwell, Palantir and Asana all file for IPOs with a combined venture-backed valuation of about $44 billion.  They’re hoping to see more of the good fortune that blessed IPOs like Lemonade, Vroom and ZoomInfo.

The majority are in sectors that have benefited from changes in customer behaviour wrought by the Coronavirus pandemic.  Snowflake, J Frog and Sumo Logic are all cloud-based solutions with a surge in demand due to remote working; Unity Software provides tools for building video games; Amwell is a tele-health solution and Asana is a maker of workplace collaboration software led by Facebook co-founder Dustin Moskovitz.  The exception is Palantir, the data crunching giant founded by Peter Thiel with close ties to the US government.

Both Palantir and Asana filed for direct listings as opposed to a traditional IPO.

Whilst demand for tech stocks has been stratospheric over the past decade, there has been much criticism of the way in which these companies go public.  The main issue is due to the underwriters/ investment banks tend to err on the side of caution when setting the IPO price in an effort to ensure the shares open successfully and trade at a premium.  This leads to the shares being underpriced. A successful roadshow will deliberately generate much greater demand for the shares than the amount on offer.  At the same time, the investment bank has the power to select which of their clients receive the underpriced shares.   This leads to the second major issue as once the shares enter pre-listing trading and then open trading, the only people that can sell are those recipients of the undervalued IPO shares.  The few profit by selling to the many, including retail investors.

This underpricing is reported to have cost founders, employees and investors $7.8 billion in companies that have gone public in H1 2020 with the average company underpriced by 31%.  This has acted as a deterrent to the most successful tech companies. 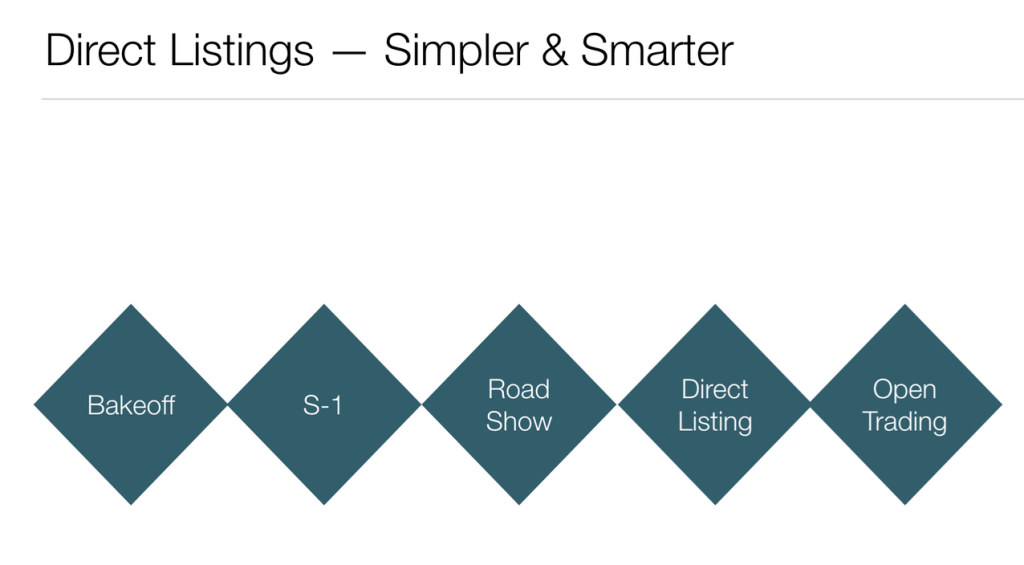 When Spotify went public via a Direct Listing in 2018 it was the result of two years’ work by the then CFO Barry McCarthy to find a better alternative than a traditional IPO.  The direct listing process is much simpler and utilises the same market-based processes and systems used by stock exchanges to open stocks for trading every day to overcome the two main issues encountered in the traditional IPO process.  A Direct Listing removes the two steps where the shares are “underpriced” and then allocated to the investment bank’s best clients.

A Direct Listing still has the “Bake-Off” to select the adviser, the S-1 form for the SEC filing whereby the company registers with the US Securities and Exchange Commission (SEC) and there is still a Road Show.  For Direct Listings the road shows tend to be online, open to all potential investors and will often be more detailed than for an IPO.

The next step is where the key benefit arises and this approach for Direct Listings seems obvious:

The main drawback to Direct Listings has been that until the recent announcement by the NYSE on 2nd September 2020, you could not use a Direct Listing to go public and simultaneously raise capital.  This did not matter to Spotify and others that had raised significant funds from the private markets but would deter capital-intensive companies in need of funds.

The announcement by the NYSE detailed that the SEC had approved the addition of primary capital raises to Direct Listings and removed the major disadvantage when compared to traditional IPOs.    We are yet to see exactly how this will work but going forward it is widely expected that Direct Listings will become the preference for tech companies over traditional IPOs.

SPACs are also known is the US as blank-check vehicles.  In the UK we would call them listed cash shells/investment vehicles.  They have become a hot topic in 2020 after a massive uptick in both  number and the high profile names behind them.  There is an estimated $30 billion sat in SPACs with well over 100 that have raised over $100m.

The process is simple:

The SPAC will then search for appropriate investments in high profile tech companies generally buying a percentage of the company. For the tech company, they negotiate a merger that includes a significant investment into the business as well as their shares trading on the public markets.  An M&A negotiation might take two to three months compared to the six to nine months typical of an IPO.

The Market Chaos that followed the Global Pandemic

The pandemic initially plagued the markets with economic uncertainty leading to a sharp decline in share prices.  This made IPOs and direct listings impractical options for the majority of private companies.    SPACs are a vehicle for high profile funds to invest in high profile tech companies in their hour of need, hopefully at a knock down price.

In July, a special-purpose acquisition company led by hedge fund star Bill Ackman raised $4 billion in its IPO.  This was the largest SPAC listing on record, with plans of using the capital to back a high-profile tech company. In a recent interview with Bloomberg, Ackman confirmed that the SPAC held exploratory talks with both Airbnb and Stripe about a potential deal. Neither set of negotiations progressed very far, but they provide interesting insight into the types of companies Ackman and other SPAC operators are eyeing.

Summer of the SPAC

August saw QuantumScape become the latest electric vehicle company to line up a merger with a blank-check company, a $3.3 billion combination with a vehicle backed by Kensington Capital Partners. Noted entrepreneurs Reid Hoffman and Mark Pincus teamed up on a new SPAC of their own. And a series of private equity firms filed paperwork with the SEC for new SPACs, including TPG Capital, Oaktree Capital Management and Acon Investments.

All this competition and the rally in tech stocks on public markets has created a favourable environment for tech companies to raise capital and have a listing for a percentage of their shares. The competition between the plethora of SPACs, that have money burning a hole in their pockets and a finite time to make an appropriate investment, is leading to the tech companies demanding better terms from the sponsor in relation to the purchase price, the percentage of the SPAC owned by the sponsor and any sponsor warrants.  This is leading to a lower cost of capital making SPACs an increasingly viable alternative to a traditional IPO or Direct Listing.

SPACs are here to stay and offer an innovative way for private companies to go public.   The number of companies that might combine with a SPAC is growing; however, it still represents a small subset of private companies.  SPACs will work best for capital-intensive businesses looking for a faster route to the public markets.  They will also be preferable for companies with a slightly complicated or long-term story where direct M&A negotiations with the SPAC sponsor are preferable to the exhaustive due diligence typical of IPOs.

With the recent announcement that companies can now also raise capital through a Direct Listing, we believe Direct Listings could be set to transform the traditional IPO process and lead to a sustained boom period for tech IPOs.  The emergence of fast and efficient alternative avenues to public markets has to be good for private companies; founders, employees and investors alike.

European VC Ahead Despite COVID